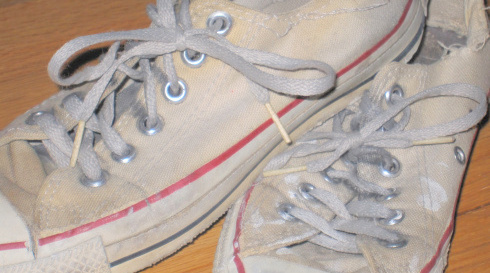 I had these sneakers for nearly 15 years. I was in love with them despite the urges from those around me who did all but beg me to get rid of them with promises that a new pair would offer me all that these had and more. Nope! This was true love. These sneakers made me happy. For me, the dirtier and more worn the better. They had holes in them and the soles were falling off and that gave them character. I was relentless. I tried to make them work in more than a million ways. Occasionally there would be a sign that they were unwearable, for example I was extra careful about putting them on so not to rip them further and never dared to tie the delicate laces too tightly. I was seriously committed to my denial.

The time finally came when it became irrefutably clear that these sneakers were no longer working for me. They had supported me (literally) through many times in my life, many changes and challenges that I had faced, and if they had a soul, they would have thousands of stories to tell. It was difficult to part with them (and truth be told, I held onto them for months even after I got a new pair) but I had to accept that they no longer worked for me and were actually hurting me. Hurting me because, being in absolute denial, I would wear them in the rain, forgetting that they had holes in them and my feet would get soaked. Or wear them when out for an entire day, forgetting that the soles were nearly gone and every step I took felt like my bare feet pounding the pavement.

I finally bought a new pair. Exactly the same (thank you Charles “Chuck” H. Taylor for your timelessness). Well, sort of. They were missing the paint and grit from many adventures and the holes that reminded me of that paths I took in life. Overall, my new sneakers lacked the character and history that took 15 years to create. But… they were still super cute, they fully supported me, I could wear them all day without my feet hurting, they were solid and could withstand the trials and tribulations yet to come. And as time happens, they have since accumulated their own character.

I love the story of my sneakers because it reminds me to consider what works in my life and what I am holding onto that no longer does. It reminds me to consider times when I put too much effort into making something work that actually doesn’t and to re-evaluate the usefulness or healthfulness of keeping that thing, habit, relationship, etc. Sometimes we have to let go, not because we no longer have a connection to or a history with something, but because it no longer works for us.

Maybe you have your own pair of sneakers? an article of clothing? a relationship? Is there something you are keeping around that no longer serves you well? What would it be like to accept that it is no longer good for you? What would you replace it with that would match what you are looking for in your present life? What is preventing you from letting go?

Jodi graduated with a B.A. in Psychology from SUNY at New Paltz and earned her Master’s degree in Social Work from New York University. In addition to over a decade of work as an LCSW with individuals, families and groups in her private practice, Jodi created Destructively Fit™, a training that addresses eating disorders within the fitness industry. Feel free to contact Jodi directly in her Greenwich Village office, 212.529.5811 or via her blog.

Jodi graduated with a B.A. in Psychology from SUNY at New Paltz and earned her Master’s degree in Social Work from New York University. In addition to over a decade of work as an LCSW with individuals, families and groups in her private practice, Jodi created Destructively Fit™, a training that addresses eating disorders within the fitness industry. She is a former director of Day Treatment at The Renfrew Center for Eating Disorders and a founding member of Metropolitan Psychotherapy and Family Counseling Practice. Jodi is the creator of a curriculum on eating disorders for the Graduate School of Social Work at New York University and has been teaching this course, as well as guest lecturing in the NYU Post-Master’s Program, for the past many years. Jodi is a contributor to We Are The Real Deal and actively lectures and teaches students, families and professionals throughout the metropolitan area about the etiology, prevention, treatment, assessment and work with eating disorders. Through psychotherapy and supportive work with adolescents, adults and families, Jodi works to create a secure sense of self, increased self-esteem and a healthy relationship with self and others. She works with an eclectic person-centered approach and tailors her practice techniques to the unique needs of each individual.

The Definitive Guide to Spring Cleaning

How To Keep Shower Curtains Mold Free–And Your Bathroom Healthy

When was the last time you gave thought to your shower curtain? Likely not lately, but we need to keep…

It's an honor to once again be featured in Real Simple's Spring Cleaning Edition. This year, the editor's reached out…