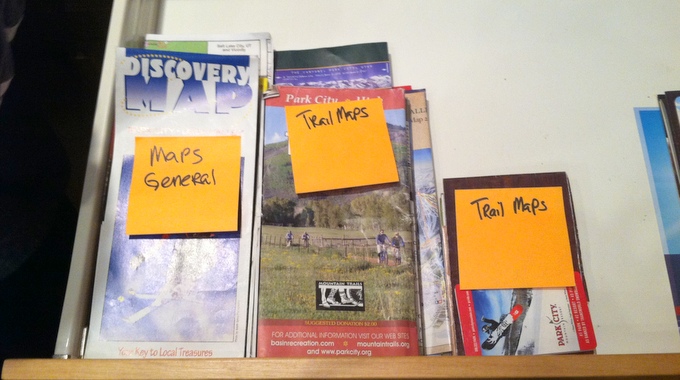 I’m out in Park City, Utah now, staying in a place that belongs to my in-laws. We were looking around in various drawers to find the key to the swimming pool gate. On the phone from Memphis, my father-in-law suggested that I look in a drawer underneath the telephone. I opened it and found about 200 brochures and maps strewn about. There was no way to look in the drawer for an errant key without taking them all out. It turned out that the key was somewhere else, but the search inspired a Maeve’s Method Moment… (should we call is MMM, triple M, or M3?).

Among the pile I made when I pulled out the contents of the drawer were: a 2003 AAA Utah Tourbook, 2006 Things to Do in Park City Guide, Summer 2008 Park City Mountain Resort Brochure, the Utah Festival Opera 2011 schedule, Park City Recreation Annual Publication PLAY 2008. I could go on and on.

I couldn’t leave it all in one big messy pile, so I started sorting…..making up the categories as I went along – Area Maps, Trail Maps, Spa and Massage, Activities in the Area, Food and Dining…and Toss or Replace. A friend wanted to help. Her instinct was to toss anything that had an old date. I think she was a bit frustrated with me that I wasn’t ready to toss so much, but I felt uncomfortable making a decision like that with stuff that wasn’t mine…..and I knew that trail maps and town maps don’t change that much from year to year. On the other hand, old coupons, schedules, and price lists won’t do us much good now.

The truth is that we weren’t here to straighten up the brochure drawer, so this activity was put on hold a few times so we could go to the pool (with the key found elsewhere) and later out to dinner and then into the hot tub. I was with 5 wonderful old friends and soon we were soaking in the hot tub chatting about about life, families, jobs, busy lives….

It didn’t take long before I was being made fun of for taking on too many projects at once. For example, a trip to the grocery store rarely allowed me to go through the express lane. I also always had various things cooking at one time, while also finding a way to entertain my 4 year old. (Sometimes that meant cooking up some homemade play-dough or allowing her to play with “ingredients” in the kitchen, creating a mess. We like to say, that ‘making a mess is just part of the cycle of the kitchen”…..followed by cleaning it up and making another mess, and so on…. Unfortunately, my husband is less fond of the mess part of the cycle than Lucy and I are. But that is the topic of another blog post.)

A prime example of my expanding projects is when I look for something. If I don’t find it quickly, I usually start cleaning up and putting things away. (If I’m lucky I can get Lucy to help me with her toys as she sings a Maeve’s Method concept which she has internalized – “Everything has a home.” But, that is also the topic for another blog post.) Sometimes , like yesterday, I realize that there really isn’t any obvious way to clean up….or a part of the house is just too crowded and needs some work. That is when I find myself in a Maeve’s Method Moment.

As a psychologist, I know that during therapy things often feel more chaotic and confusing before they get better. I think Maeve’s Method is like therapy for your space. Before you can create the systems and structure that work for you, you need to evaluate what it is you have – that usually means pulling it all out and making a mess. You also need to take some time to think about your space and what you want it to do for you. I talked to Maeve about my brochure drawer experience and we began musing on how to simplify Maeve’s Method down to its essential principle. What seemed to make most sense to me was this – The most important thing in your space is YOU. That means that YOU need to be in charge of your space and your experience in it. YOU need to decide what your priorities are and how to create systems and structure that work for you. Then, you need to allow Maeve’s Method Moments to pop up now and then to inspire you to take charge again when something isn’t working anymore.

I received my PhD in Clinical Psychology from Georgia State University in 2007 and am a licensed psychologist in the state of Georgia.

I have taught undergraduate psychology classes at Georgia State (Theories of Personality, Abnormal Psychology, Psychology of Aging, and Interpersonal Behavior). I have also been part of a research-team at the Veterans Administration Medical Center evaluating group therapies for post-traumatic stress disorder.

Over the past few years I have been developing my thoughts about mindful and intentional parenting. For more information on that, please use the link above.

Help Your Kid Organize Their Closet

If you have kids in New York, chances are they’re home for the mid-winter recess. And with the extra cold…

I'm headed to Atlanta, GA in a few weeks to soft-launch my national tour, Organizing Homes Across America. One…

Start your day like a pro organizer - check out our tips and more from Good Housekeeping. Enjoy!

This site uses Akismet to reduce spam. Learn how your comment data is processed.

Doing a little year-end organizing. How about you?

Check out this cool conversation chair at Marni! P

Chlorine stuck in your beach towels? Look no furth

What’s a lady entrepreneur to do on a hot summer

Thrilled to lead the 6/23 organization workshop. B

This lavender plant is growing out of control in m

Spring Cleaning season is around the corner, as so

Do you ever look at your #jewelry? Check out the i

It's weekend project time again! We offered up 12

A throwback within a throwback, found this photo y

It's Valentine's Day! Have any hearts hidden in yo

How do you hang your earrings? Pop some favorites

Load More... Follow on Instagram
Call for a FREE Consult.
Find your Home at Last.
Book Now
2004-2020 The Maeve Richmond Company Inc. All Rights Reserved
Back To Top
×