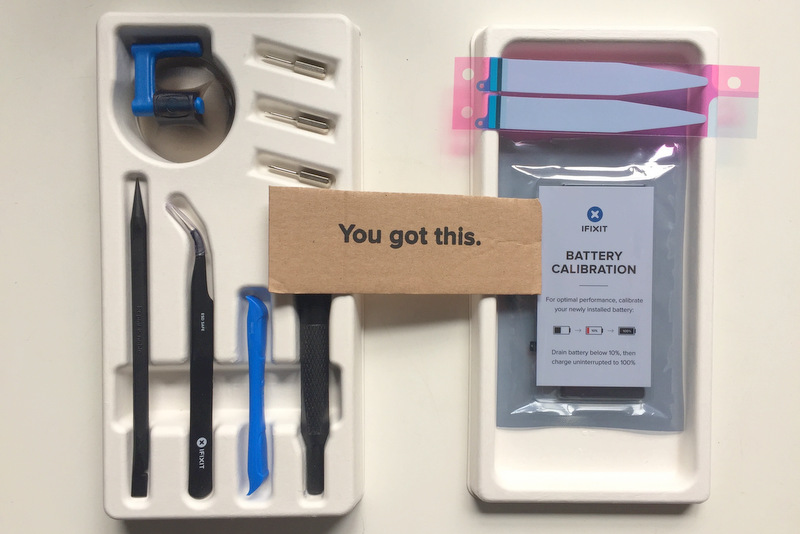 Last week I took the plunge and self-serviced my iPhone. Like so many, my iPhone 6 took a hit during Batterygate. After working fine for years, it soon became unable to hold a charge for no more than a few hours, and lived in low-power mode. I love DIY and I’m a tech geek, so I knew I could do it. But I’m not going to lie, I was nervous going in.

My approach was to watch a bunch of YouTube videos. I started with the perky Gwendolyn Gay from iFixit, the company from whom I purchased my battery replacement kit (Gwendolyn has since moved on, check out her goodbye video). This was great, but she made it look just a little too easy. I wasn’t confident yet. Next I watched a guy named John. This was long, but I watched the entire thing, and I’m glad I did. Despite the idiots who complained in the comments that John talked too much, I like that he showed us his process (and mistakes) in real time. Finally, I watched Jeremy, whose succinct video sealed the deal. In addition I read lots and lots of comments–absorbing everyone’s triumphs and mistakes–and finallyI felt ready.

The fix took 20 minutes, it really shouldn’t take longer than this. The time consuming part is pulling out the adhesive strips stuck to the underside of the battery. You have to do it slowly, and it requires patience. My fear was that the strips would tear as I yanked on them and I’d be forced to pry the battery out, possibly destroying my phone. But I took a deep breathe, then started to pull. Before I knew it the strips were freeing themselves, sliding seamlessly out from underneath the battery with little effort. You do need to pull with consistent exertion, though. I kept my fingers close to the phone, taking up adhesive strip slack as I went, about every two inches. Just stay patient, as you are going to pull tape longer than you think–this stuff is stretchy and there’s more under the battery than might think.

I have to agree with many of my fellow DIYers that a design requiring command strip style glue strips to hold it in place seems a nuisance. I remember all my electronic devices from the ’80s, ’90s and ’00s and none of them had battery cages with breathing space. But this is how Apple keeps lithium batteries from sliding around inside the phone, so be it.

I picked up a bunch of awesome tips from the videos and comments. The best by far though was the woman who suggested using tape to secure the iPhone base to the table as you worked. This was brilliant. I used blue painters taped rolled over itself into a ball and it kept my iPhone from sliding even as smidgen as I worked.

The other tip that rocked was the suggestion not to remove the phone screen. It’s entirely unnecessary–you can do the repair without it. I watched video after video of folks removing the screen (along with its five Phillips screws and two cable connectors) and I couldn’t understand the value. Instead, anchor your iPhone to something steady and at a 90º angle. I used a Whole Foods Tomato Basil soup box. I strapped the phone to the box with a rubber band and it held perfectly.

Finally, I have to give props to iFixit.com for making this whole thing so easy. Not only was the replacement battery (and the set of tools that comes with it) cheap–$24.99–but their site is loaded with helpful step-by-step information. And, best of all, the inspirational message that comes on their packaging rocks. There’s nothing better when you are feeling a bit nervous or insecure than a message of assurance and confidence. Their little ‘You got this’ message made me feel like a million dollars, from start to finish. So much so that I cut it out and hung the little cardboard sign on my front door, where I see it everyday.

I was going to video my adventure but my best camera lives inside my iPhone! And there dozens upon dozens of solid videos already out there that do the trick. Check out the links I posted above, or search for your own. Just be sure to find help that’s specific to your iPhone model, as the steps and insides of the phone might be a bit different for each. Enjoy!

Must Have Art For Your Floor

I recently met a great rug designer, but wow, I had no idea how stunning her work was until I…